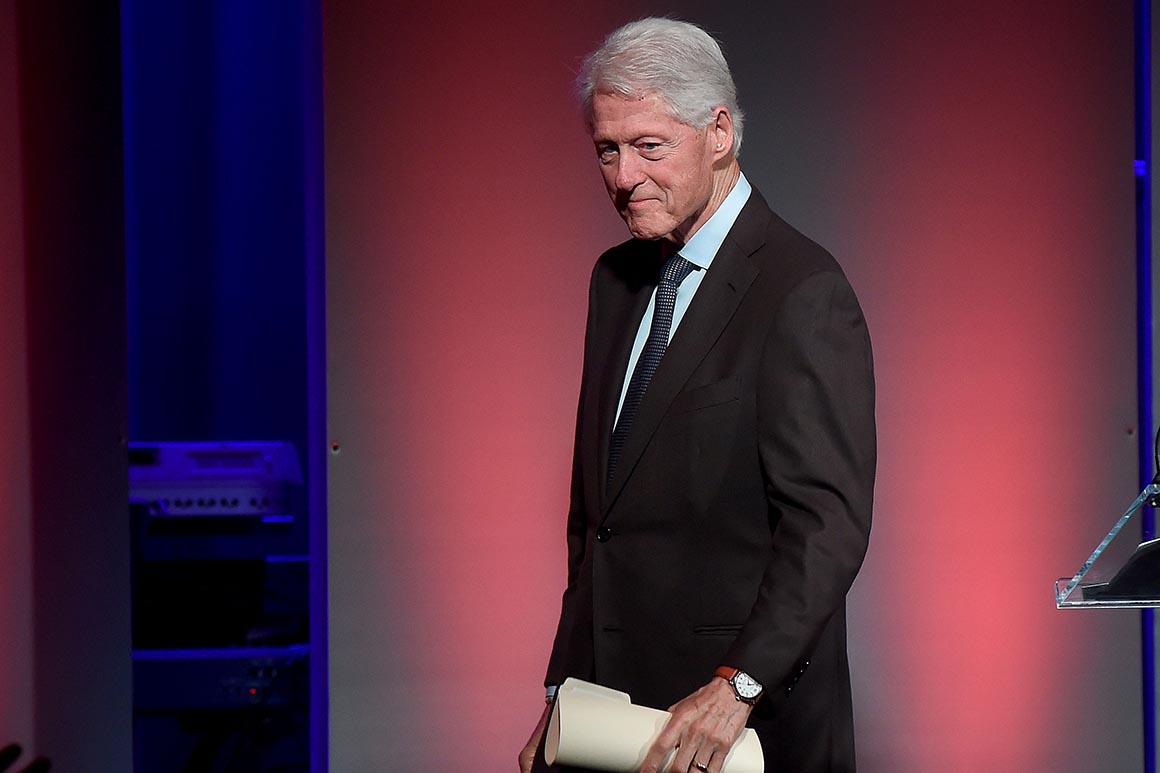 President Donald Trump may be the one fighting in the Senate to keep his job, but on Capitol Hill and across the country, it can feel like someone else is still on trial: Bill Clinton.

Clinton’s own impeachment trial, once a fading cultural artifact in the C-SPAN archives, has suddenly received new life. The Washington figures who lived through it are enjoying a nostalgic return to the spotlight and lawmakers are squabbling over the 20-year-old event. And that C-SPAN archive is now a treasure trove for anyone looking to score political points.

Come Tuesday, the public will also be reintroduced to one of the most memorable Clinton impeachment figures — Kenneth Starr, who oversaw the most contentious parts of the yearslong probe into the Democratic president’s behavior. Trump on Friday placed Starr on his legal team, with an eye toward the TV optics of having the legal nemesis of the last impeached president now on the other side, defending this impeached president.

There are logistical reasons to revisit Clinton’s Senate trial — it’s the only modern precedent of its kind. But there are also cultural reasons — the country is trying to grapple with how Trump’s current predicament fits into the sweep of American history. In short, how did we get here?

“It’s natural to want to reach back into history and try to find parallels to the last time an impeachment happened,” said Leon Neyfakh, producer of Slate’s popular “Slow Burn” podcast series that featured an entire season focused on the events leading up to Clinton’s impeachment. “I think there’s a desire to set expectations for ourselves. We want to not only know what to expect, but we want to properly calibrate our expectations.”

It’s a phenomenon that has come to define each step of the Trump administration — the president winds up in a largely unprecedented scenario, and everyone goes looking for historical comparisons.

With special counsel Robert Mueller’s appointment to investigate Russian interference in the 2016 election, for example, reporters and cable TV bookers went in search of any of Clinton’s investigative antagonists, former Watergate prosecutors and pretty much anyone else who had ever probed a president.

Even without impeachment, Trump and Clinton would forever be linked in the history books, thanks to the president's victory over Hillary Clinton in the 2016 election. But no matter what happens in Trump’s Senate trial, impeachment has linked the two men with President Andrew Johnson as members of a very exclusive and small club.

On Capitol Hill, Clinton’s impeachment has resurfaced mainly as a cudgel in the ongoing fight over the current impeachment process.

From Senate leaders on down to House members trying to score attention on social media, lawmakers have been scouring for nuggets from the Clinton fight that could help justify their arguments about Trump’s impeachment. 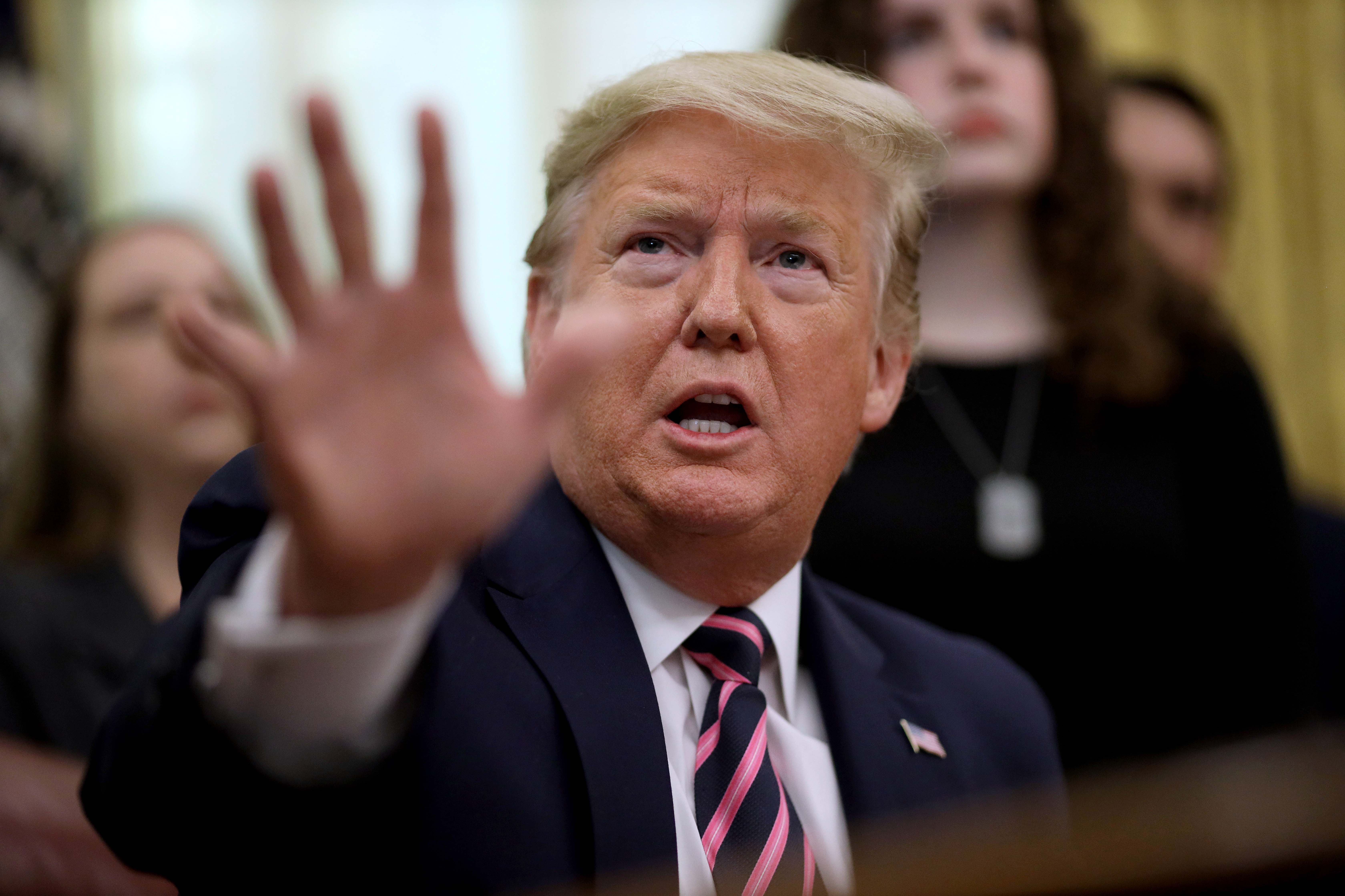 Senate Majority Leader Mitch McConnell has used Clinton’s trial to support his case for running the upcoming Senate impeachment trial — that a decision on whether to call and question witnesses should occur only after each side makes its opening presentations. He and other Republicans have noted that in 1999, senators voted 100-0 on a rules package that deferred the vote on witnesses till after opening arguments.

But House Speaker Nancy Pelosi has portrayed the lessons of the Clinton impeachment in a very different light.

Earlier this week, the California Democrat released a side-by-side chart illustrating the differences in how the two presidents handled their respective defenses. While Trump blocked the release of documents and testimony from a dozen key witnesses, including nine who got subpoenas, Clinton allowed his investigators full access to the materials they sought.

Rhode Island Democratic Rep. David Cicilline, a member of the Judiciary Committee that drove the Trump impeachment, has drawn another contrast between the two cases. He noted this week that during the Clinton case, South Dakota Sen. Tom Daschle, the Senate’s top Democrat at the time, refused to speak to the White House about its defense strategy. This time around, McConnell has worked in lockstep with the White House, and made no secret about it.

Another factor driving the Clinton impeachment rehash: the words of the members of Congress themselves who held office back more than two decades ago.

A quarter of the current Senate served in Congress during the Clinton impeachment — 15 as senators and 10 more who back then were in the House. The current House also has 55 members who were in office when the chamber voted in December 1998 to seek Clinton’s ouster.

The internet hive mind and political activists have been rooting around for anything that could be used to indicate hypocrisy.

Liberals have resurfaced this old clip from Maine GOP Sen. Susan Collins, in which she backed the Senate’s consideration of new witnesses and evidence. Similarly, Sen. Sheldon Whitehouse hit his colleague Lindsey Graham, a staunch Trump defender as chairman of the Senate Judiciary Committee, over rediscovered footage showing him arguing about the need for witnesses during Clinton’s trial.

“That was then, this is now?” the Rhode Island Democrat mused.

Meanwhile, conservatives found footage of Pelosi criticizing Republicans’ Clinton impeachment process for “any and all grievances anybody ever had with the president.” Rep. Doug Collins, the top Republican on the Judiciary Committee, also tweaked panel chairman Jerry Nadler in September by resurrecting his 1998 comments warning that impeachment would “divide a nation for years to come.”


On TV and at news outlets across the country, the Clinton nostalgia has led to a scramble to find even seemingly tangential players.

There are people like Susan McDougal, the former Bill Clinton business partner, who popped up in March 2018 to talk about her decision to go to jail rather than testify before a grand jury. Her choice was suddenly relevant again after a former Trump campaign aide had threatened to do the same thing.

There are even people like disgraced former Illinois Gov. Rod Blagojevich, who is serving a 14-year prison sentence for trying to sell Barack Obama’s Senate seat. Blagojevich found a home to publish his take on the president’s impeachment because he’d once served in the House and voted against impeaching Clinton.

Figures who were actually central to the Clinton impeachment process are even more in demand.

Former Rep. Bill McCollum of Florida was one of the Republican House managers who made the case for removing Clinton on the Senate floor. He’s recently made the rounds in the media and on multiple podcasts to describe the “intimidating” moment of presenting his argument.


What to expect in the Senate trial


“It’s like going to the World Series and your team is playing, only you’re on the team,” he told NBC.

The reappearance of McCollum and other Clinton-era Republicans now mostly removed from elected politics has illustrated the evolution of the GOP over the past generation.

McCollum and several of his GOP cohorts have been candid that they believe witnesses should be allowed at Trump’s trial, a stance at odds with most of the current Senate Republicans. McCollum told ABC that witnesses were “appropriate” for both Democrats and Republicans.

The witness issue is a sensitive one for the former Clinton impeachment managers. Several of them are still smarting from Republican Senate leaders’ decision to strike deals with Democrats that they felt limited the House prosecution at the time.

So to now see the Clinton trial held up as an example of fairness and bipartisan comity can be frustrating. Former Rep. James Rogan, a House impeachment manager who is now a California state judge, said during a podcast interview with the Daily Signal that he had been troubled to see Senate leaders from that era “patting each other on the back for their bipartisan effort to totally tube this trial.”

Ex-Rep. Chris Cannon of Utah, another former Clinton impeachment manager, has another problem with one of the rules from the Clinton trial that may be replicated in the Trump case: allowing senators to ask questions of House managers.

“All you had were random questions from people who were embarrassed about the underlying issues,” Cannon told NPR, expressing a longing for a more traditional trial.

“It means that you present witnesses, that the defendant has the right to confront those witnesses and that you have examination, cross-examination, presentation of evidence and then a decision,” he said.

If the modern Republican party has its way, Trump’s trial will not reflect Cannon’s idealized event at all.


Broadcast networks are leaning into the renewed cultural interest in the Clinton trial.

On CNN, a Wolf Blitzer-narrated documentary recapping Clinton’s acquittal aired earlier this month. The special drew an audience of about 620,000 viewers across the country despite airing against the Golden Globes, according to Ad Week.

Archived Clinton footage is getting a new wave of interest at C-SPAN, too, which has created a special tab on its impeachment page for the 1998-99 events, as well as a three-part series covering that Judiciary Committee debate, House floor vote and Senate trial.

“There definitely are people coming to the C-SPAN site and discovering their own gems — and sharing the raw video to make their arguments and shape their narrative,” he wrote in an email. “The value of the video library is seeing the consistencies … or inconsistencies … depending on your point of view and the party in power … in their approach.”

Trump’s impeachment has also meant bringing Clinton back into the mix on “Saturday Night Live.”

Last October, comedian Darrell Hammond reprised his role as the former Democratic president in a sketch alongside Trump impersonator Alec Baldwin. The two joked that while Clinton’s sexual escapades led to impeachment, Trump had faced allegations of affairs and harassment and emerged largely unscathed politically.

“Well,” Hammond said, showing off his trademark reproduction of a Bill Clinton facial tic with a thumbs up, “that is progress.”

Something is missing from the charges against Trump: An indictable offense.