After the former president’s endorsement of a former critic rocketed J.D. Vance to the GOP Senate nomination in Ohio, the two senators can’t help but see things the same way. Hawley (R-Mo.), who led Trump-backed election challenges in the Senate last year, observed that “he’s the leader of the party, that’s clear … If he decides to run, he will be the nominee.”

And while Romney twice voted to convict Trump in impeachment trials, speaking out against him more than any other sitting GOP senator, the Utah Republican also concluded that anyone who argues the former president is fading away is not tethered to reality.

“I don’t delude myself into thinking I have a big swath of the Republican Party,” Romney said in a Wednesday interview. “It’s hard to imagine anything that would derail his support. So if he wants to become the nominee in ‘24, I think he’s very likely to achieve that.” 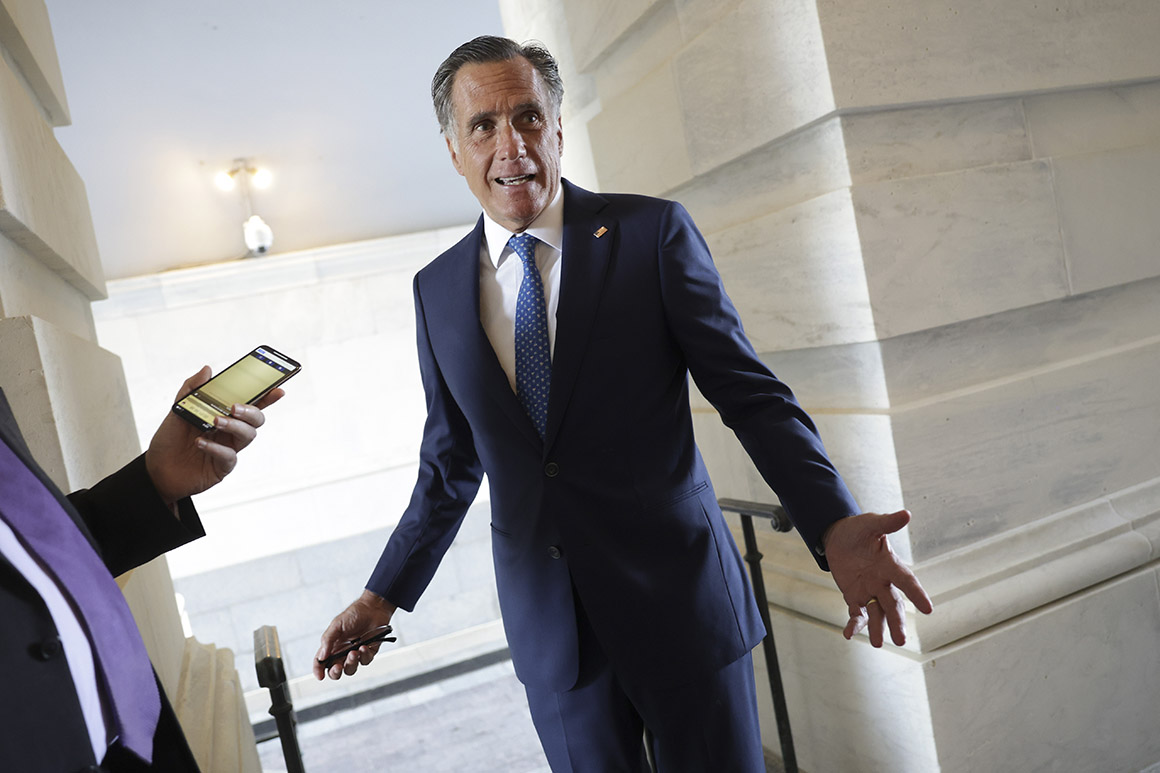 Though Tuesday was just one night in a crowded spring primary calendar, Trump’s romp in Ohio signals that — for all the talk of his waning influence after losing in 2020 and getting impeached for inciting an insurrection — the GOP is still in his thrall. He’s unlikely to topple several sitting governors he’s gone after. But when it comes to federal primaries, Trump far overshadows every other GOP figure, from the establishment to party gadflies, according to interviews with nearly a dozen GOP lawmakers.

Trump-endorsed House candidates Max Miller and Madison Gesiotto Gilbert cruised through their respective Ohio primaries on Tuesday night. In the northwest corner of the state, J.R. Majewski, a Trump fanatic known for using paint to transform his lawn into shrines to the former president, notched an upset of two better-funded rivals.

That was just one week after Trump praised Majewski and his landscaping at an Ohio rally for Vance.

“There's never been an endorsement in American history that has the political punch that President Trump's endorsement has,” said Rep. Jim Jordan (R-Ohio).

At the moment, Vance’s flailing-to-sailing campaign is a case study in Trump's ability to change the game for a candidate down the stretch. Vance was dead in the water two months ago, but Trump’s mid-April endorsement plus big spending by a Peter Thiel-backed super PAC vaulted him over his primary rivals Josh Mandel, Mike Gibbons, Matt Dolan and Jane Timken.

Six years ago, retiring Sen. Rob Portman (R-Ohio) significantly outpaced Trump in 2016 as he romped to reelection in Ohio, even after rescinding his endorsement of the then-presidential nominee. Things looked much different this time around: Portman’s preferred candidate Timken ended up in fifth place, torched by a brief defense of Rep. Anthony Gonzalez’s (R-Ohio) impeachment vote that lost her Trump’s potential backing.

“I told you the endorsement was going to matter. And it did,” Portman said of Trump backing Vance. “He has a very high approval rating among Republican primary voters.”

It also didn’t hurt that in Ohio “you had two other frontrunner candidates who almost beat each other up on stage,” quipped Sen. Shelley Moore Capito (R-W.Va.), referring to a televised clash between Gibbons and Mandel during a primary debate.

Ohio won't end debate over Trump’s GOP sway after four chaotic years in the White House; in fact, his pull will be tested on a weekly basis this spring. And if he can replicate his performance in Ohio in most races, there will be little doubt that Trump’s blessing is determinative in open seats.

“When Trump endorsed, Vance was in fourth place. And he rocketed to the front on the shoulders of Trump’s endorsement,” said Sen. Ted Cruz (R-Texas), who campaigned for Mandel in Ohio. “It has been obvious for a long time that he has enormous influence in the party, that Republicans strongly support President Trump, and they care about his leadership.”

As to whether Trump is the frontrunner for the 2024 nomination, Cruz said of his former 2016 rival: “I think Trump always feels like the frontrunner in every circumstance.”

After 18 months of build-up, the primaries are now coming fast, starting next week with a West Virginia battle between Republican Reps. David McKinley and Trump-backed Rep. Alex Mooney, as well as a Nebraska gubernatorial race in which Trump endorsed Charles Herbster, who — like the former president — has faced accusations of sexual assault.

Then comes Georgia, where Gov. Brian Kemp has a steady lead over Trump-backed former Sen. David Perdue and Georgia Secretary of State Brad Raffensperger squares off against Trump ally Rep. Jody Hice. Trump yanked his Senate endorsement of Rep. Mo Brooks in Alabama after Brooks’ numbers sank down the stretch, raising eyebrows among Senate Republicans. He’s expected to endorse one of Brooks’ rivals.

That's all within the next month.

Trump will struggle to win all of those races. And his allies are hoping Trump would be a gracious loser — a high bar for a man who still refuses to admit he lost to Biden.

“If one of his preferred candidates loses down the road, I hope he’ll do the same thing everybody else should do, which is get behind the person that won,” said Sen. Lindsey Graham (R-S.C.), who called Trump’s endorsement “outcome-determinative” for Vance but also laughed that “70 percent of the people voted for somebody else” in Ohio.

In Georgia’s Senate race, Trump essentially ended the Republican primary before it even started by anointing Herschel Walker to challenge Democratic incumbent Sen. Raphael Warnock. Republicans have barely lifted a finger to try and stop the scandal-plagued Walker given his popularity among GOP voters, reasoning that if they are going to win the seat they have to do it with Trump’s candidate. Senate Minority Leader Mitch McConnell endorsed Walker last year.

Asked why Trump has gone quiet in his reelection race, Thune responded: “Good question. I don’t have any answer to that.”

Sen. Mike Rounds (R-S.D.) offered one explanation: that Thune is so popular in the state that he’d be difficult to beat under any circumstance. And in high-profile Senate races, Trump’s been relatively strategic. He endorsed Vance and Oz late to help push them over the top and has stayed away from scandal-plagued former Missouri Gov. Eric Greitens’ Senate bid.

Trump's also aligned with the deep-pocketed Club for Growth to help vault Budd into the lead in North Carolina, two factors that when combined “have a pretty big impact,” said National Republican Senatorial Committee Chair Rick Scott (R-Fla.). That pro-Budd alliance comes after Trump and the Club supported different candidates in Ohio.

But even where Trump hasn’t endorsed, the GOP primaries are mostly about Trump anyway.

Ally Mutnick contributed to this report.