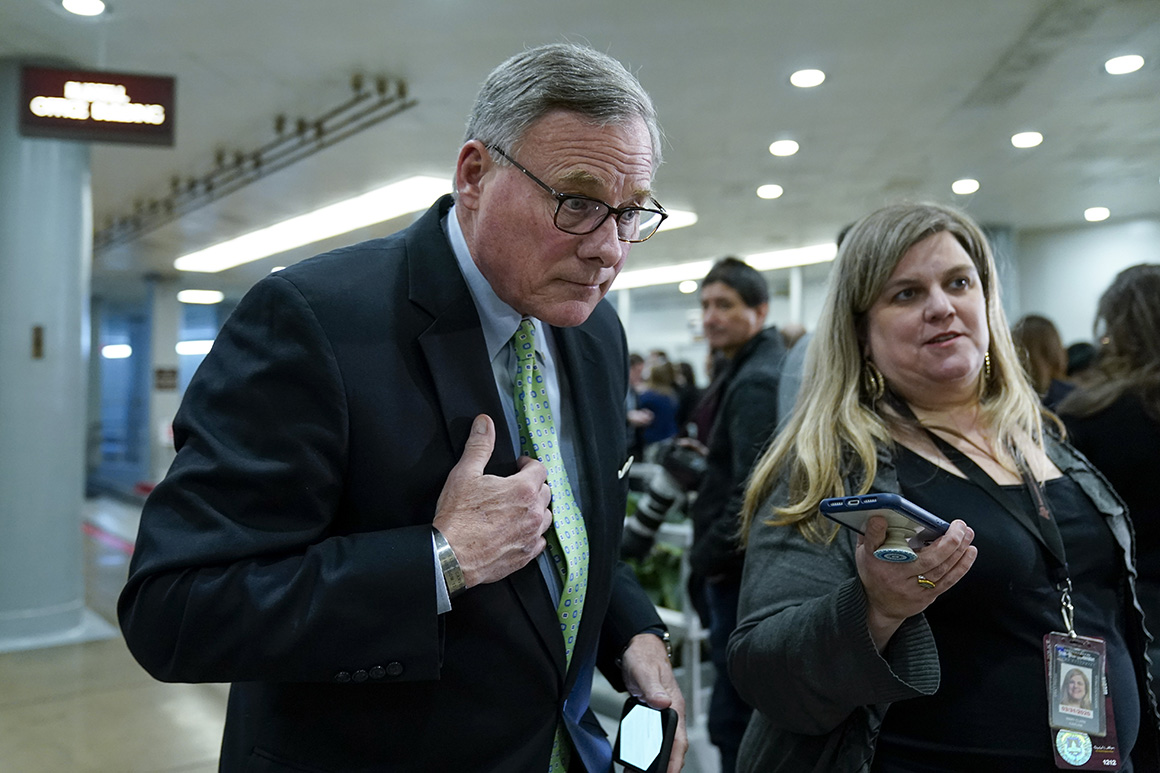 Senate Intelligence Committee Chairman Richard Burr (R-N.C.) said on Thursday he has “no problem” with a White House lawyer’s argument that American politicians can accept damaging information on their opponents from a foreign country — a proposal that shocked Democrats.

White House Deputy Counsel Patrick Philbin told senators during Wednesday’s session of President Donald Trump’s impeachment trial that it was a “mistake” to believe that any information about a political opponent that originates from a foreign country amounts to improper interference in a U.S. election.

“I have no problem with what Philbin said,” Burr told reporters.

Philbin, responding to a question about whether Trump believes foreign interference in an American election is “illegal,” told senators that as long as the information is credible, it is relevant to American voters.

The argument outraged Democrats — including Burr’s counterpart on the Intelligence Committee, Vice Chairman Mark Warner (D-Va.), who said “my head exploded” when he heard the remark. Burr and Warner have worked closely on the issue of election interference in the aftermath of Russia’s efforts to meddle in the 2016 election — perhaps the only bipartisan duo in Congress still working closely together on the issue.


“I think [Philbin’s arguments] dramatically weaken America’s expectation that we’re going to have a free and fair elections. I think it directly contradicts the work of” the intelligence community, Warner added.

House Democrats seeking Trump’s removal from office repeatedly warned that an acquittal would embolden Trump to seek derogatory information on his political opponents from foreign powers.

The House impeachment managers noted Trump’s ABC News interview last year in which he indicated his openness to accepting such help — and they also cited reports that Burisma, a Ukrainian energy company where former Vice President Joe Biden’s son previously served as a board member, had been hacked by Russian intelligence agents.

The White House’s posture also follows years of investigations by the House and Senate intelligence committees seeking to understand the extent and impact of Russian interference in the 2016 election. Lawmakers of both parties, while sharply divided over Trump’s involvement in the 2016 effort by Russia, have long agreed that the Kremlin’s campaign was wrong and dangerous — and that all foreign interference should be prevented.

Burr wasn’t the only Senate Republican who appeared to approve of Philbin’s argument.

“I think all he was addressing is whether there was a crime. And what I understood him to say is there is not — it is not a crime, per se,” Sen. John Cornyn (R-Texas), a member of the Intelligence Committee, told POLITICO.

“The president is the presidency — he is that branch of government. Everybody reports to him, including the attorney general. Are you saying that the American people shouldn’t know about or we shouldn’t pursue criminal wrongdoing just because it’s overseas?” Johnson told reporters.